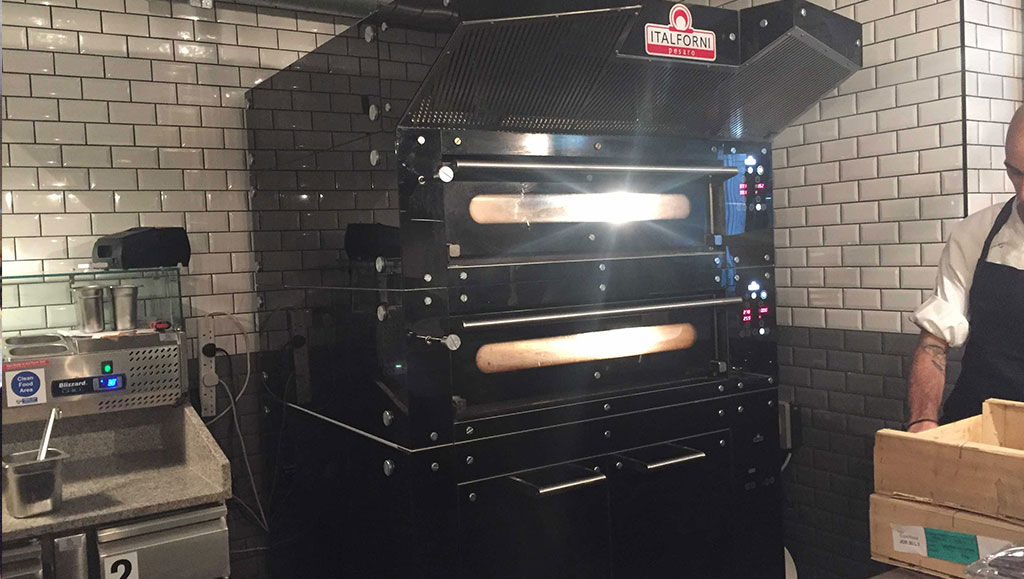 An Italforni ‘Bull’, specified and installed by Euro Pizza Ovens in Durham and supplied by Euro Catering, is making a front-of-house statement at Saatchi & Saatchi’s new London headquarters which previously was based on Charlotte Street.

‘The Pregnant Man’ is also open to the public when not hosting private agency events, so having an oven that could attract and entertain diners, within an open and airy design, was key. Initial thoughts around a wood-fired oven dissipated once the ‘Bull’s’ benefits were pitched.

As the world’s first oven made with tempered stained glass, the ‘Bull’ is an aesthetically stunning and eye-catching oven, both in the sleek black ‘The Pregnant Man’ preferred and the alternative of bright red.  However, this oven is available in any RAL colour – even psychedelic patterns – to suit any décor.

With its clean-cut lines and shiny appearance, this oven can quickly create sense of theatre when cooking pizza.  It also has a huge talking point, with its award-winning design incorporating a hood designed to resemble a bull’s head and horns.

As head chef at one of the first British restaurants to own this status symbol, The Pregnant Man’s Sean Martin knows ‘The Bull’ is not all style and no substance.  Thanks to refractory brick in its base, sides and top and its shock and high-temperature resistant laminated glass panels, its heat retention is superb, resulting in low running costs and consumption of just 6.5 kw per hour.  Consistent temperature also means perfect pizza is cooked hour after hour.

Nine different menu settings can be pre-programmed and a panel of genuine touchscreen controls facilitate easy operation.  Sean Martin and his pizza chefs all undertook training with Euro Catering’s corporate development chef, Darren Massey, at Euro Catering’s demonstration kitchen, ensuring they now make the most of the oven’s superb functionality.

Social media posts are already conveying how much diners are enjoying delights such as Parma ham pizza, fully endorsing Euro Pizza Ovens’ specifying the ‘Bull’ for one of London’s most prestigious venues.

Peter Simpson, director of Euro Pizza Ovens, says: “I needed to find a visually impressive oven with catering ‘swagger’.  I spotted the Italforni ‘Bull’ and quickly contacted Euro Catering, as its UK supplier.  Having worked with Euro Catering for nearly two decades, I knew their own relationship with Italforni stretches back 20 years, so was confident in recommending this oven on the basis of both their endorsement and their longstanding relationship with Italforni in Pesaro.  Once I saw the oven for myself, I knew it would have the desired wow factor.”

Euro Catering’s sales director, Justin Towns, says: “The Italforni is a stunner in any scenario and we are sure it will be a huge success at ‘The Pregnant Man’.  This oven could be a game-changer for any venue that wants to impress front-of-house, but which also wishes to keep fuel costs low and retain the ease of cooking with electricity.  There is simply nothing else like it.”