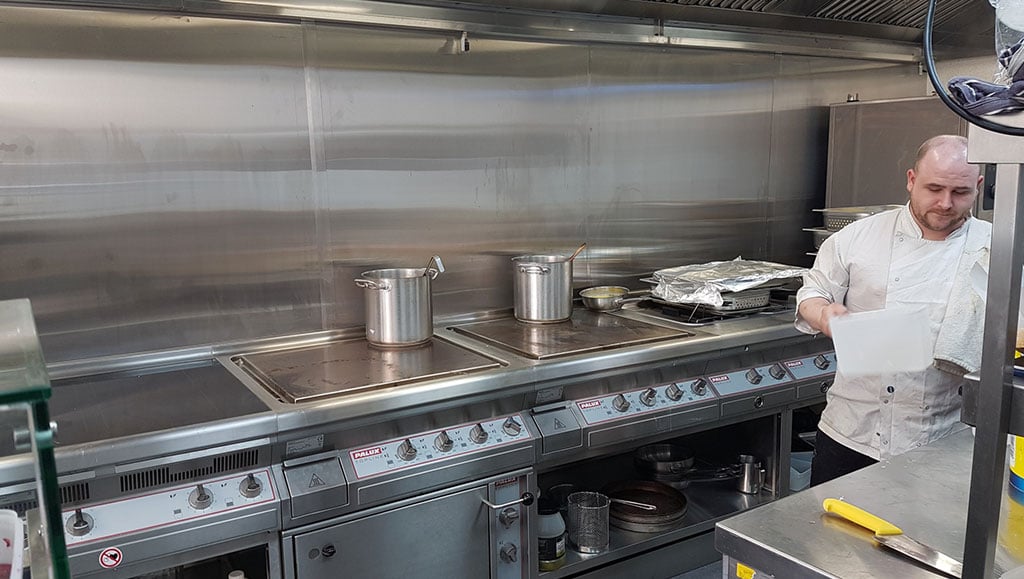 Euro Catering has sympathetically married up centuries of history with 21st-century catering equipment, having completed a successful installation at Wygston’s House, in Applegate, Leicester.

Wygston’s House is an architectural gem and a Grade II-listed building believed to be Leicester’s oldest surviving house. The medieval, timber-framed hall at the heart of the historic property dates back to the 1490s.  A Georgian block was built in 1796, and a Victorian wing added later.  Now, the state-of-the-art catering equipment that has been installed is giving the building its latest new lease of life.

Wygston’s House’s kitchen serves diners in a bar and daytime snack area downstairs and a high-end formal dining room operating an à la carte menu upstairs that offers “haute rustic food with a professional touch”.  This is based on local produce and rarer meats and so required multi-tasking and flexible equipment.

The choice of equipment capable of handling this brief was guided by the advice of Euro Catering’s, Franco Sparano, who has worked with the new tenant of the Leicester City Council building, Geoff Thornton, in other venues run by his 006pubco.

The new kitchen, instrumental in attracting diners and writing the next chapter in Wygston’s House’s history, is both streamlined and energy-efficient.  A Palux Topline heavy-duty modular cooking line, incorporates induction hobs, planchas and fryers and acts as the kitchen’s operations centre, backed up by a Giorik Sete 10/w, 10-rack combi oven and a Giorik Hi Lite salamander grill.

This equipment has been used by Mr Thornton in other eateries and provides the functionality and energy efficiency he requires.  Using induction cooking, plus salamander grill, removes heat from the kitchen, creating a more pleasant working environment for the team of chefs.

The Palux Topline draws upon latest knowledge in engineering, ergonomics, hygiene and organisation and is a space-saving solution formed from easy-to-clean, high quality, long-life chromium nickel steel.  Its highly polished surfaces, fitted with induction hobs emitting low-heat radiation, are both attractive and efficient, with units having almost instantaneous heat-up times.

High-capacity Palux deep-fat fryers cook gently and ergonomically, thanks to a flat-tube heating element, which also optimises fat usage.  The plancha sears and grills food beautifully, whilst the Giorik Hi Lite salamander is an energy-saving grill reaching 200°C in 20 seconds and dramatically reducing power consumption by up to 79 per cent.

With the flexible Giorik SETE 101W ‘Steambox Evolution’ oven, to grill, roast, braise, smoke and produce food au gratin, not to mention handling bread and pastries and also steaming food with either dry or wet steam, Wygston’s House has a complete and well-planned catering equipment line-up to support eclectic, healthy and innovative menus.  With items such as rolled curried goat on saffron pilaff rice, cassoulet with Toulouse sausage and curry-crusted cod on the menu, this top-notch and flexible equipment has been put through its paces and proven its effectiveness.

Franco Sparano says: “This was an exciting and unusual project to work on, but specifying the Palux Topline suite was an easy decision, because its features ideally suited the brief and the venue.  All equipment within this kitchen plan is super energy-efficient, making it a modern solution in a centuries-old building.  By taking much of the heat out of the kitchen, we are also probably assisting the infrastructure, which still includes timber frames within the medieval hall at the heart of the building, although the brief was very much focused on minimising energy consumption and providing equipment that can multi-task.”

More information about Euro Catering’s Palux and Giorik ranges, as well as many other brands, can be found at www.euro-catering.co.uk  Enquiries can be made by calling 01455 559969.