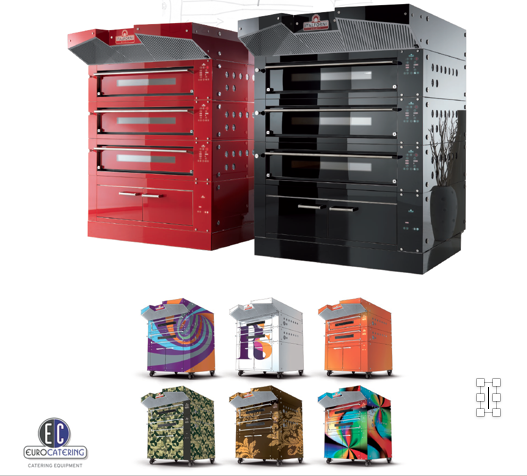 Sports teams and restaurants close to sports grounds can now benefit from fandom at a whole new level, and potentially achieve a world first, if they opt to offer fans the hugely popular menu choice of pizza and cook it in what is becoming the most talked about pizza oven of the year – the Italforni ‘Bull’ oven from Euro Catering.

This superb Italian pizza oven does everything you would expect it to, but in a unique style. The oven won the 2014 Design Award at the world’s biggest food exhibition – Gulfood – thanks to a design that resembles the forward stance of a bull, and due to a stunning aesthetic.  The latter is created by heat-resistant coloured glass panels, which shine and shimmer on an oven that is the first in the world to be made of tempered stained glass.

A ‘Bull’ is also now in situ at ‘The Pregnant Man’ pub in Chancery Lane, at the new London headquarters of Saatchi & Saatchi, thanks to its incredible aesthetic appeal and ability to create a stir front-of-house.

However, it’s the fact that this oven, which comes as standard in red or black, can actually be ordered in any RAL colour, or combination of colours, that makes it such a draw for those wanting to nail their sports team’s colours to its mast.  Whether you want it in black and white, to attract loyal Geordie fans, or in claret and blue for West Ham, Aston Villa and Burnley FC, the option exists.

Euro Catering’s sales director, Justin Towns, says: “Depending on the size of ‘Bull’ chosen, up to twelve 30cm pizzas can be cooked simultaneously, or up to five 60x40cm trays loaded.  The oven also comes with a two year parts and one-year labour warranty and has genuine touchscreen controls that make operation child’s play.

“However, the reason it has recently been a star attraction at Italforni’s stand at Foodservice Australia – and at other exhibitions around the world – is because it simply looks stunning, even in the standard colours of red or black.  If its tempered stained glass were coloured to suit the colours of a particular team, and it could be situated in a highly visible location, it would be a massive draw for the venue operating it, whether that is a sports club itself, or a restaurant close by, or affiliated to a club in some way.

“Our mission at Euro Catering is to work with what would be not just the UK’s first sports club or venue to configure a ‘Bull’ in team colours, but the world’s first.  I suppose the ultimate would be the Bradford Bulls, but any club that becomes the first will benefit hugely from the worldwide publicity surrounding the visual impact of their customised ‘Bull’.”

Any club wishing to explore this further can find out more about the oven at www.euro-catering.co.uk or call Justin Towns on 01455 559969.